The seven things God hates are a catalog of sins summed up in Proverbs 6:16–19. While these aren’t the only sins that should be avoided, they do sum up most of the wicked things condemned by God. The seven things God hates are the sins that deal with the deep heart motives of the individual. The writer of Proverbs points the finger straight at our hearts and our sinful thought processes.

This is in line with our Lord Jesus Christ’s elaboration of the Ten Commandments during His Sermon on the Mount (Matthew 5:21–48). Sin is committed the moment it is conceived in the heart, even before it is actually committed. Avoiding the seven things God hates will help us expose our hidden intentions and motives.

The following is Proverbs’ list of seven things God hates:

Arrogant (haughty) eyes: This describes a feeling of pride and looking down upon others (Philippians 2:3, 5–11). When we begin to think of ourselves more highly and with unparalleled importance, we are forgetting the fact that anything good in us is the result of Christ living in us and that the old self is now dead (Galatians 2:20). Often, believers feel superior to other believers when they receive godly wisdom and display amazing tenacity against sin. We fail to realize these gifts were given by God through Christ and fanned into flame by the Holy Spirit and are not due to our own goodness. This sin of pride is so detested by the LORD that Paul was kept from committing this sin by being provided with “a thorn in the flesh” to humble him (2 Corinthians 12:7).

Lying tongue: A lying tongue is one that speaks falsehood, knowingly and willingly, with an intention to deceive others. Lying can be used to impugn the character of a brother or to flatter a friend. It is a most detestable evil to God, who is a God of truth. Nothing we do causes us to more closely resemble the devil, who is the father of lies (John 8:44).

Hands that shed innocent blood: This refers to cold-blooded murder. We may never have orchestrated killing someone or never have touched a gun or knife, but in Matthew 5:21–24, Jesus says that anyone hating someone else unreasonably without offering room for forgiveness commits a sin equivalent to murder. John reiterates this concept in 1 John 3:15.

A heart that devises wicked schemes: This encompasses thinking or conceiving evil against any individual or group for personal benefit or other misguided objectives, like modern-day terrorists indulge in. Any sin is basically a wicked scheme. David’s sin against Uriah the Hittite and Bathsheba comes to mind (2 Samuel 11). The heart of an evil man continually contrives schemes to bring others to ruin, whether physically or spiritually.

Feet that are quick to rush into evil: Those whose feet are quick to rush into evil display no resistance whatsoever to sin. Having many examples in the Bible, and having the indwelling of the Holy Spirit (Ephesians 4:30; Galatians 5:16), we are expected to be wise in this regard (Romans 6:11–14; Ephesians 5:5, 11). In the Garden of Eden, Eve had the first experience of temptation. She displayed no resistance to the serpent’s temptation. Instead, as soon as the devil attracted her to the fruit, she “saw that the tree was good for food and pleasing to the eye” (Genesis 3:6). Eve had sinned at that moment itself. Contrast this with the attitude of Jesus: when tired and hungry after forty days and forty nights of fasting, He refused to yield to the devil’s tempting and killed the temptation in His mind without allowing it to grow into sin (Matthew 4:1–11). “Resist the devil and he will flee from you” (James 4:7).

False witness who pours out lies: This is similar to the sin of the lying tongue mentioned earlier, but this form of lying is given special mention as it could send an innocent person to jail or even lead to him being stoned to death as happened to Naboth, thanks to false witnesses instigated by the wicked Jezebel (1 Kings 21:8–14). The prohibition against bearing false witness is the ninth of the Ten Commandments, and the New Testament is equally condemning of it. Colossians 3:9–10 explains the reason for the continued prohibition against lying. Christians are new creations in Christ (2 Corinthians 5:17), and, as such, we reflect His nature. We have been released from our “old self” with its evil practices such as lying and bearing false witness.

A man who stirs up dissension among brothers: Brothers are created by God to live in unity (Psalm 133:1; 1 Thessalonians 4:9). Believers are brothers and sisters since they have one Father God and one Brother, Jesus Christ. The Church is also the Bride of Christ (Ephesians 5:25–27). In many situations strife among brothers and even within the church seems unavoidable, but anyone who purposely causes disruption to peace in the body of Christ will displease God above all, since that person gives room for others to sin and for himself to sin further (1 John 2:9–11; 4:19–21). Moreover, Jesus pronounced a great blessing on peacemakers, the privilege to be called “sons of God” (Matthew 5:9). 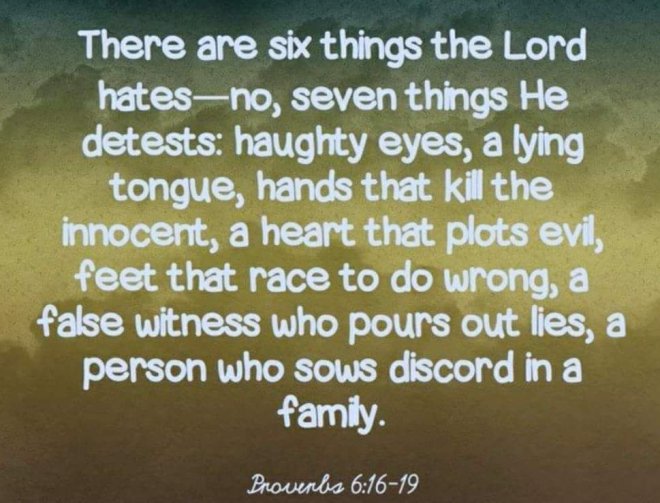